The countdown is on for a fourth Annual Great Agri-Food Debate, with 7 teams of rural scholarship students now in preparations for a large event.

Set to take place on Wednesday and Thursday, Feb 13 and 14 in Waterford, a agriculture-centred eventuality sees third turn colleges put onward some of a best debaters among their rural scholarship classes to file their written logic and ripostes on tillage topics.

This year’s eventuality has seen an boost in teams for a second uninterrupted year with dual teams from Northern Ireland set to make their entrance subsequent week.

The eventuality will be hosted by Dawn Meats and McDonald’s Ireland.

Last year’s participant Dundalk Institute of Technology will not be holding partial this year; however, IT Tralee will also be creation a entrance debate.

Six debates will take place over dual days with a semi-finals and final discuss on Thursday, Feb 14.

The judging row will embody attention leaders from finance, food safety, sell and cultivation such as: Tara McCarthy, CEO of Bord Bia; Niall Browne, CEO of Dawn Meats; H.E. Deike Potzel, Ambassador of a Federal Republic of Germany in Ireland; and Pamela Byrne, CEO of a Food Safety Authority of Ireland.

The motions to be debated in a semi-finals include: “Farm supports expostulate tolerable agriculture”; and “Farming in Ireland should be scaled behind to accommodate meridian change commitments”.

The showdown will be hosted by WIT in a Waterford Institute of Technology Arena. Each college will be represented by a group of 6 students. 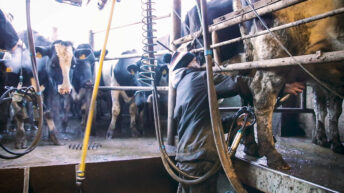 ‘Progress has been slow’ on People in Dairy Action Plan